During the 18th century, Greco-Roman Mythology is at the centre of Art in France as shown throughout painting, theatre and music. The mythological heroes and heroines are often put in action in operas as well as in cantatas. The cantata is a new musical genre played in every concert room and chamber in the early 18th century.
Besides Jupiter, Neptune and other warrior gods, the favourite deity of composers and librettists is “Amor”, son of Venus. He is often depicted as a blindfolded child firing arrows at lovers and helped forge numerous couples from Didon and Énée to Orpheus and Eurydice. But on Mount Olympus resides another god far less serious and source of inspiration for another worldly pleasure: wine and drinking of said wine! Many cantatas, operas and even drinking songs were inspired by Bacchus and his unrestrained consumptions.

This program was built around little-known works, found in the musical archive of the Arsenal de Paris Library (BNF), such as Didon et Énée mis en concert by André Campra. An interesting music score showing a then widely used technique, consisting of rewriting a piece to make it longer and played by a larger number of musicians. In this case, André Campras added an opening and dances to the initial cantata. He also added entire musical parts (violin and oboe) to the original version, thus transforming it in a small opera. 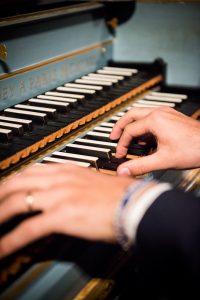