André-Cardinal Destouches had an amazing life. After a diplomatic trip to Siam, he becomes one of the king’s musketters, and distinguishes himself, especially during the siege of Namur, with Louis XIV. That is when he discovers his passion for music. Back to Paris, he works with Campra, whom he writes themes for, that can be found in L’Europe Galante.
In 1697, at 25, he writes his first opera, that becomes a huge success and that will be played a lot during the XVIII century.
Issé, performed for Louis XIV at the Versailles Trianon, was a masterpiece and granted Destouches a prominent place (according to Titon du Tillet “the King assured that, since Lulli, no music has given him so much pleasure”). It’s been 10 years since Lully died and he still remained the unquestioned reference for music in Versailles and Paris.

After the work presented by the ensemble Les Surprises about the opera Les Eléments, of Destouches and Delalande, the recreation of Issé, first opera of a great but still too much unknown composer, appeared like an evidence. 320 years later, this piece still remains as one of the pillars for the after Lully and before Rameau period of time. Destouches, following the legacy of Lully, opens a way to the Rameau period with this heroic pastoral. Mixing tragic and comic episodes, he announces the “pastoral spirit” trend. 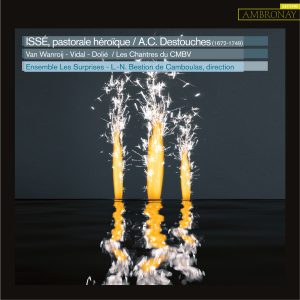